When Dan and I got married 2 1/2 years ago, I wrote a speech that I gave at the rehearsal dinner. For those of you that were there, you will remember that it was WAY too long. I think I’ve blocked it out of my head just how long it actually was. I can remember spending a lot of time on what I wanted to say because there were so many people in my life that I wanted to thank. So many people who had influenced my life in great ways, and who I believe, helped mold me into the person that I am today.

I now find myself looking at the people in Brittain’s life. How will they influence her? What will they bring to her life? How will what they teach her help mold her into the person that she will become?

One thing I have really started to enjoy is watching Brittain and how she interacts with different people. There is a definite look she has for people that she’s not around a lot. Don’t get me wrong, the child seems to smile at anyone who looks at her, but there are subtle, yet very noticeable changes in her expressions when she’s with different people. I love seeing her with my sister. Cecilia is so silly when she’s with her. Brittain has a plastered smile across her face when she’s around her. It’s as if she knows that she’s young, and stylish, and fun. I love it when Cecilia comes into town. When she’s here, quite often you will find us rapping “Dunkie Butt” and dancing with Brittain. She loves the change of pace from the normal Baby Einstein classical pieces! Cecilia has always been a natural with children and babies. She grew up babysitting and all the kids loved her. Cec has been around Brittain from the beginning, spending almost every night in the hospital and taking care of her when Dan and I were resting. I love that Brittain has had, and will continue to have her influence in her life.

There’s also no denying the connection Brittain has with family members. Grandparents, great Grandparents, aunts and uncles, great aunts and uncles…they all bring something different to her life. I think it’s interesting that mine and Dan’s families are from different places. Although Dan’s family has been in Georgia for quite some time, they were raised up North. Then you have my family who have always lived in the South. There are definite differences in the way of thinking, attitudes, and personalities. What a wonderful thing for Brittain to be exposed to both.

I have recently thought a lot about what I want to teach Brittain. What is it that I want to instill in her? In my life so far, what have I found to be some of the most important things to remember? What do I want her to view as the true meaning of life? Much of who I attempt to pattern my life after is my Aunt Susan. Most of you who are reading this probably know her, but if you don’t, then you should.

Describing Aunt Susan is a somewhat difficult task. There are so many aspects that go into making her who she is. To say that she is a lover of life would be an understatement. She is a lover of all living things. If you go to her house you will also see that she is a collector…of almost anything that’s interesting and out of the ordinary. You will see that she has many plants. Most of them are simply a sprig in a small pot (that is sure to have some meaning). There is a story for all of them, where she found them, and why they are a part of her life. She has cats…many of them, most of whom she rescued off the side of the road. This appreciation for life has never waivered, but when she was diagnosed with breast cancer a few years ago, her appreciation became even deeper.
It would seem to make sense. You have a life threatening experience and it makes you take a step back and re-examine your life. You decide to make changes because you feel that you’re given a second chance at life that you don’t want to mess up. Again, seems to make sense, but I’m sure we’ve all seen it before. The life change might stick for a few weeks, maybe months, but then people go back. They forget. This was certainly not the case with Aunt Susan. She continued to be the person she was before and became even better. She loves and appreciates each day that is given to her. She treats everyone in her life as if she might not see them again. Her generosity extends well beyond what most consider generous. There are so many wonderful things about her, but the thing I probably love the most is her kindness, her sweet spirit and the way she treats others.

I am so thankful for the influences in Brittain’s life who believe this same way.

New Years Day with Aunt Janice, and below with her Daddy: 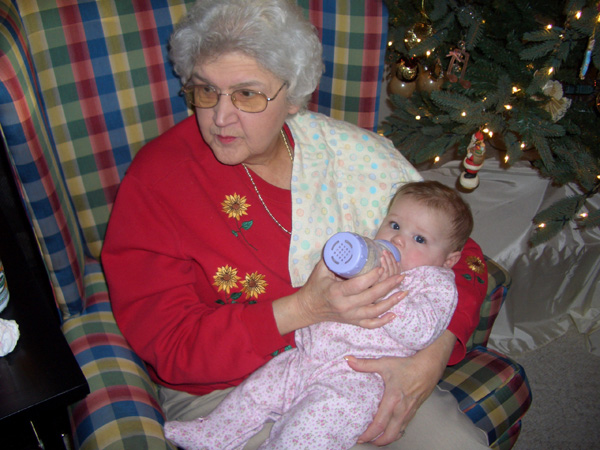 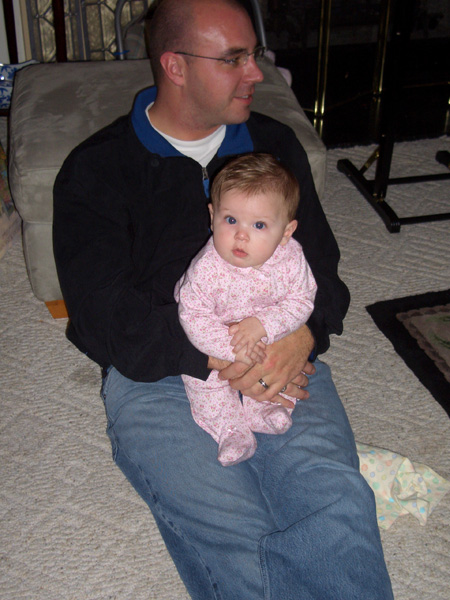 Duke and Briittain sizing each other up: 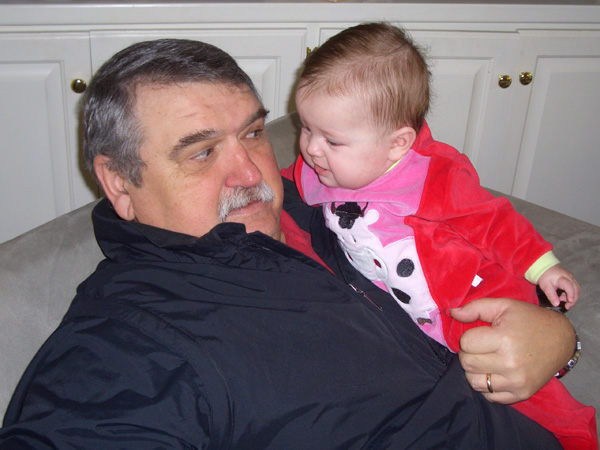 Some cute pictures that her Daddy took. Notice a fire in her eyes? Dan thought that this was going to be the day she rolled over for the first time. It wasn’t, but she was definitely ready. She ended up doing it for the first time the next day: 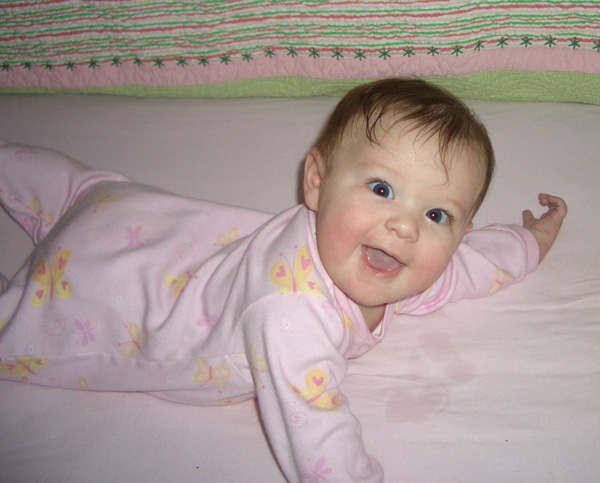 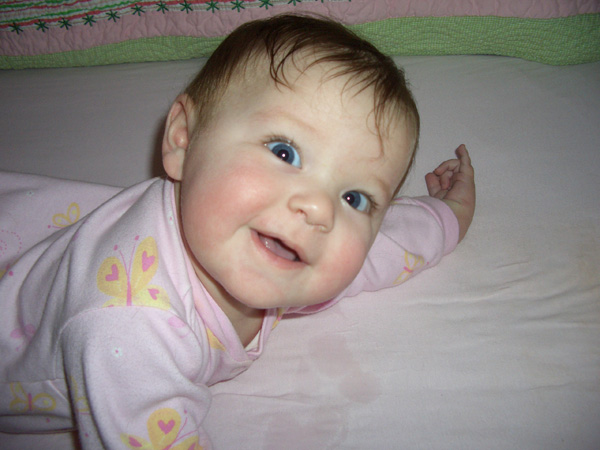 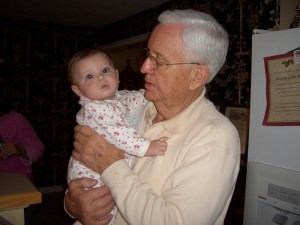 Brittain is always thrilled when she gets to see her Great Aunt Susan on days other than the normal Tuesday and Thursday each week. Talk about a face lighting up! I’m not sure which one of them has the biggest smile when they see each other every time.: 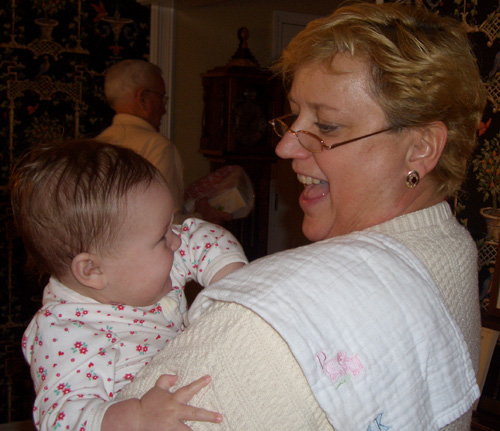 Another highlight of Brittain’s week is spending time with Lindsey Brooks on Mondays, Wednesdays and Fridays.: 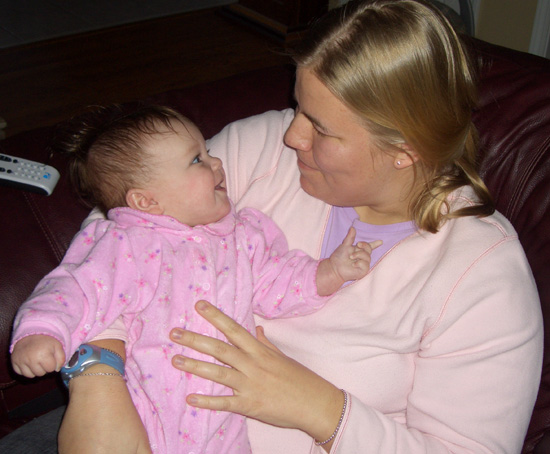 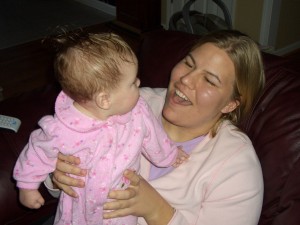 Aunt Linda stops by to visit on days when Aunt Susan is here. Wondering what the “I love you” symbol is doing in the picture? It’s Aunt Susan’s hand. She is working on baby sign language with Brittain. It’s just one of their many activities that they work on during their time together.: 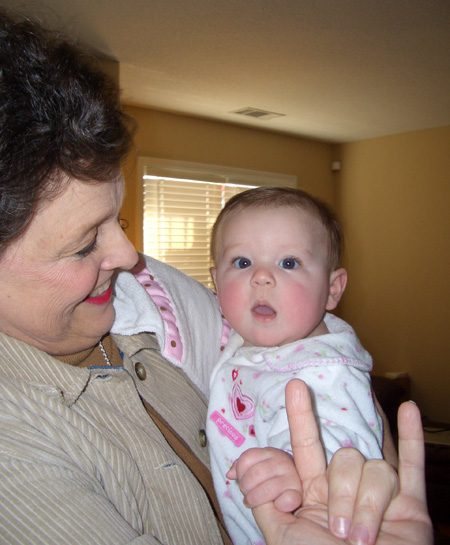 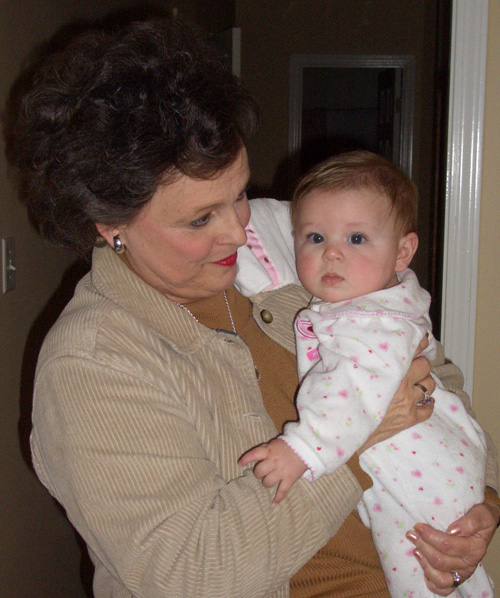 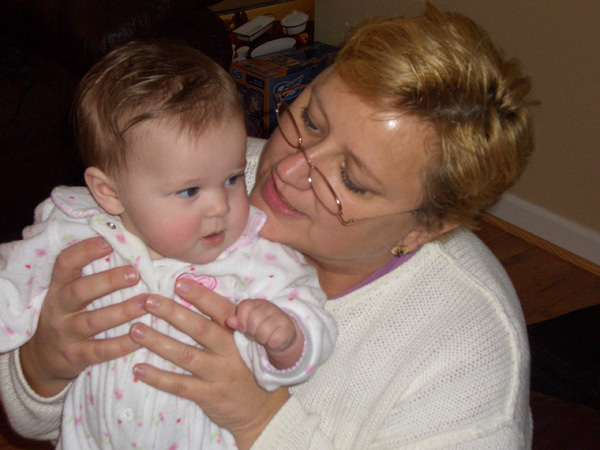 Visiting Mimi at work and modeling her new Gymboree sweater and hat that was given to her by Mimi and Duke for Christmas: 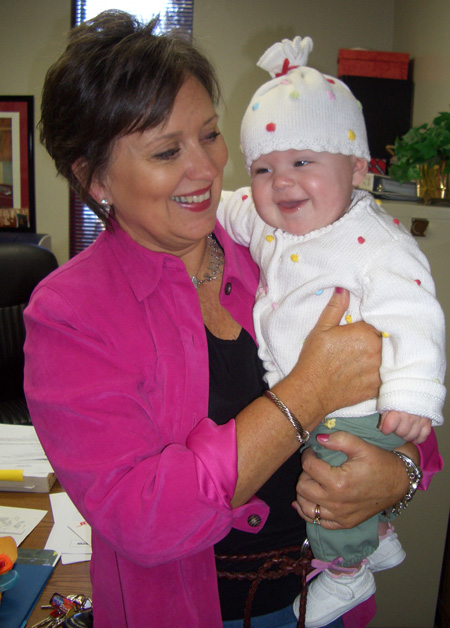 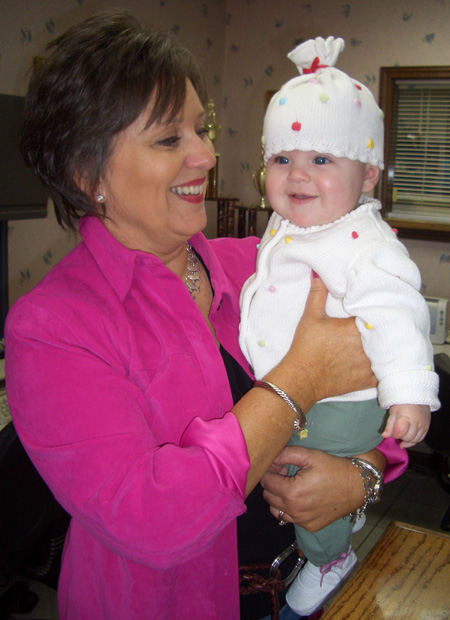 Well, she did it. This evening, in the presence of myself and my mom, Brittain rolled over for the first time! Do you think I could have ever guessed that I would get THIS excited over a simple task that we as adults do every day? No, I couldn’t have known. But, when I saw her push up from her tummy and then suddenly be on her back, you would have thought she had just won an Olympic medal. I seriously think I would be equally excited for both.

So, I wonder. Was it the nap that gave Brittain renewed energy to perform this milestone tonight? Or was it knowing that her mommy and her aunt had both slept in and rolled over in the crib that she was in? Whatever the reason, this is certainly one of many special events that we will be able to take part in as Brittain’s parents.

Recently, Brittain has started eyeing food that we eat, staring at each bite as it goes into our mouth. I knew what that meant…she’s ready for some real food. So, I went straight to the internet, looking up and reading as much as I could about how to do this the right way. I suddenly was overwhelmed when I started looking. What if I don’t give her enough cereal? What if I don’t leave her on it long enough before starting a vegetable? What if I accidentally give her a fruit before I give her a vegetable and then she won’t eat the vegetable? Yes, many thoughts ran through my mind. I finally found a site that spelled it out in easier terms. First things first. Start giving one tablespoon of rice cereal once a day. Easy enough. So, we did it. Brittain ate her first few bites of food this past Saturday. What fun, and what a sight!

Here are some pictures from the event. Since this day, I have continued to try and give her some cereal once a day. For some reason it seems that her interest has decreased since that first night. I did some more reading and also talked with the pediatrician today. The next step is to not give it to her for about a week, and then try again. I’m being patient. I know it will click!

Sitting in her high chair for the first time…awaiting that first bite: 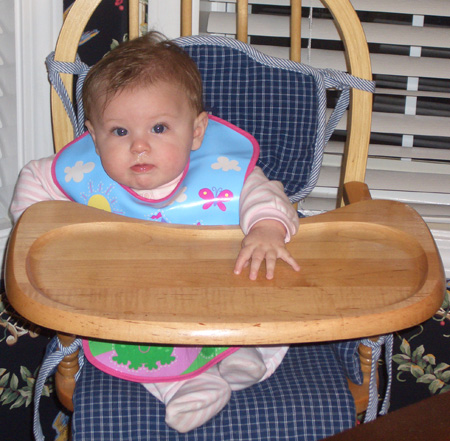 Deciding that she’d rather eat the wood: 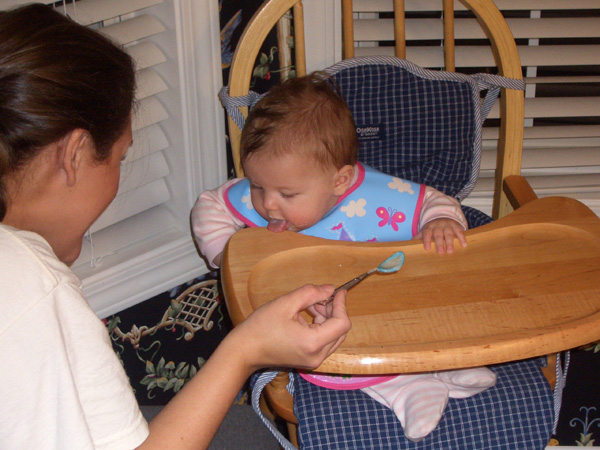 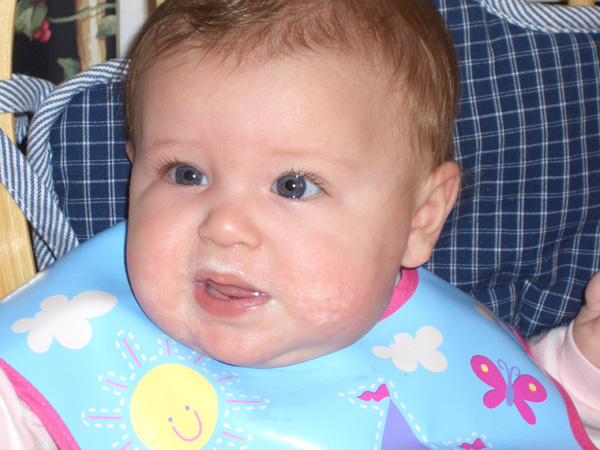 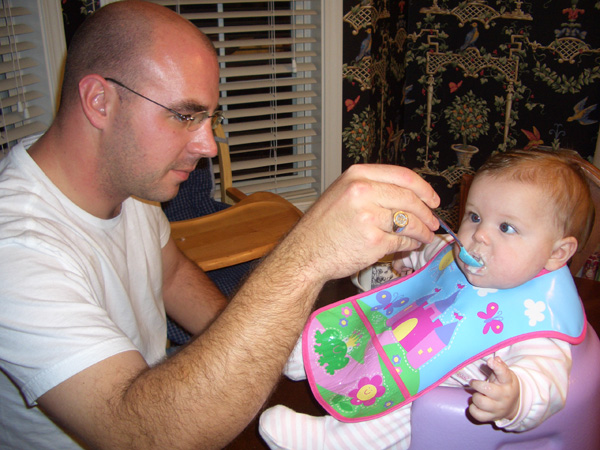 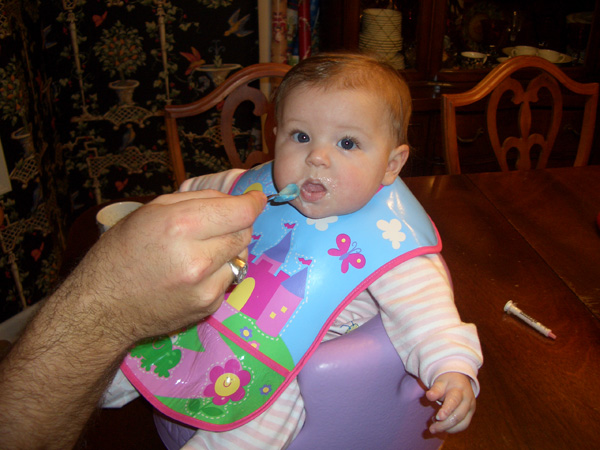 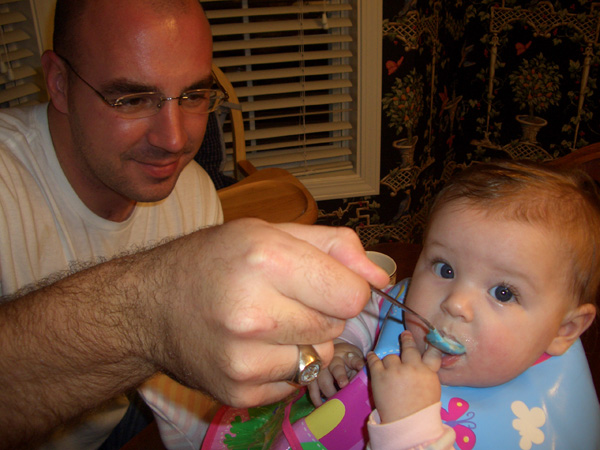