A Good Time Had by All

I am so thankful for my friends. As I’ve said many times before, having a baby has been the most wonderful change in my life. But, along with that, it has also caused a lot of feelings and emotions that have been stressful. The changes that your body goes through is such a huge part of it that many people don’t think about. Then, there’s the added stress of just learning to be parents. I believe the thing that has helped me the most have been my friends, especially the ones I have who have just had children.

My church has always been an important part of my life. Being involved in music there is one of the most enjoyable things I do with my time. There are 3 couples in the adult choir with me that Dan and I have become close with. All have children, 2 of them had babies within a month of Brittain’s birth. The other one is having a baby in February. Being able to spend time with these other couples is therapeutic for me. Being around others with as much sleep deprivation helps me to know that we all experience it…and all come out of it being semi-normal humans. It’s nice to know that we all have each other to call on no matter what we need or what we want to talk about. Again, it’s wonderful having good friends.

Last weekend we all got together at Kate and Justin’s house. Kate made some scrumptious food. We all hung out with the children and played Cranium. It was a great time and I look forward to more of these evenings together. 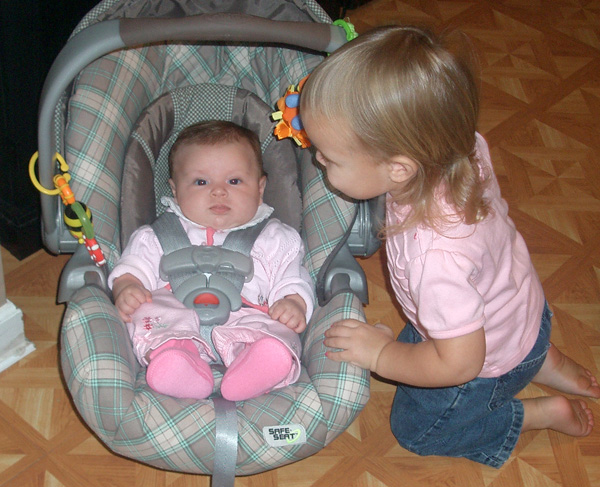 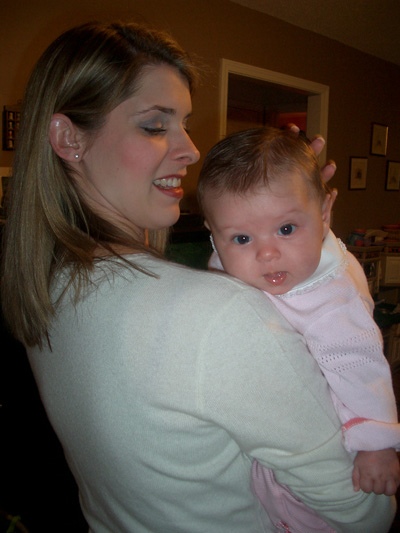 Emma Kate Kirkland and her mommy: 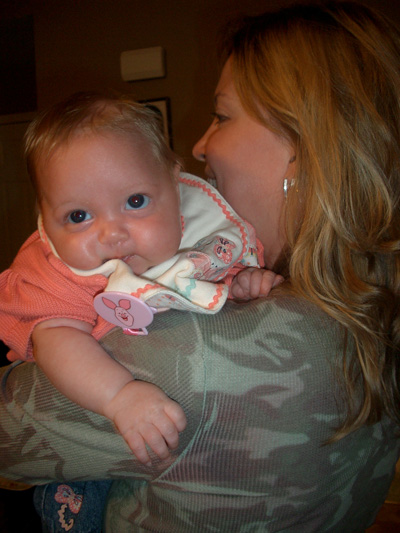 Kate Evans takes time out from munching to pose with Robert for a quick picture: 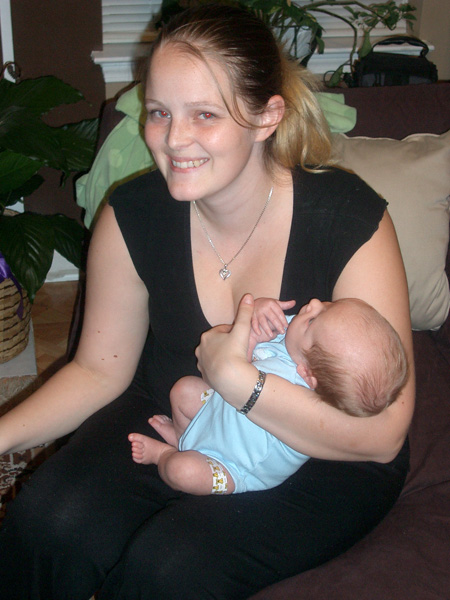 Will Mulder sings a fight song (ring tone from his daddy’s cell phone)…um…can’t remember which one. 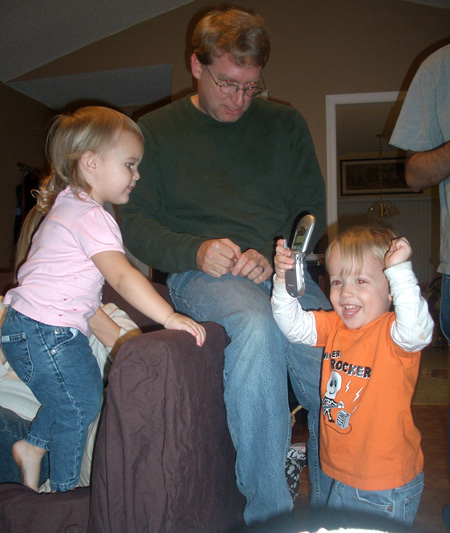 A candid shot of Will playing: 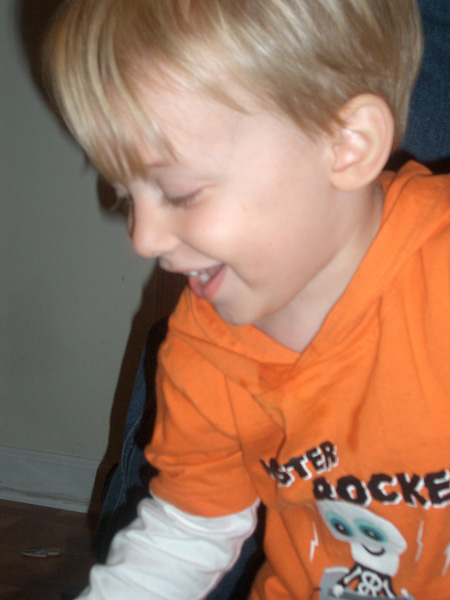 Brittain and I smile for the camera: 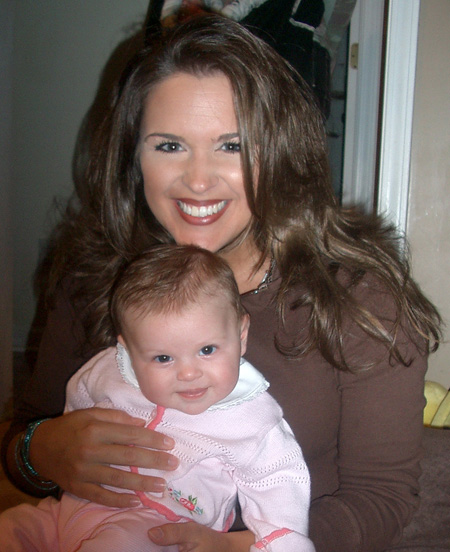 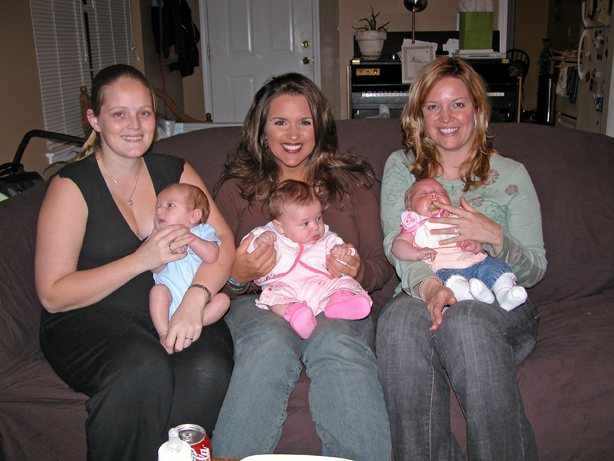 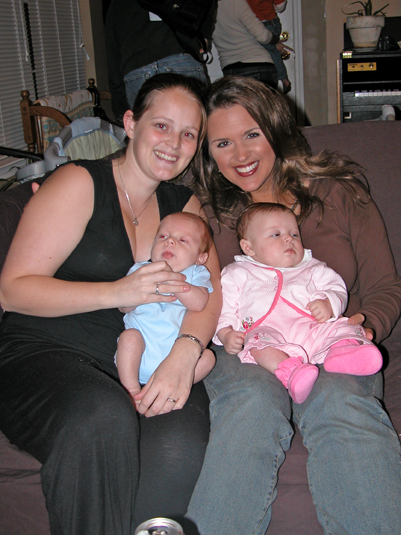 And the whole group: 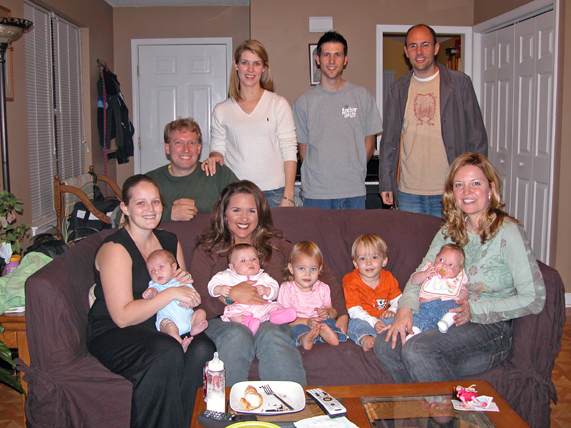 I love it that everyone in Brittain’s life has a special role. I love the fact that both mine and Dan’s families live within a few of miles of us. I grew up around all of my family and it’s something that I want Brittain to experience as well. The love that family can give her is different from the love that anyone else can.

This past Saturday was a special day for me. Cecilia is getting married next June and we went wedding gown shopping for her. Knowing that the trip wouldn’t be the same with a 3-month old attending, we called in the troops and asked for Dan’s parents to keep her. I knew it was going to be a LONG day. We were leaving at about 8:30 in the morning and wouldn’t be returning until close to 10:00 that night.

Dan had made the call to his parents to ask them if they would be willing to take on this task. They agreed and were thrilled about doing it. Dan told me that his mom was going to be sewing Brittain’s baptism gown that day. I couldn’t imagine how that was going to happen. I’m with Brittain every day and at the end of the day when I look at what I’ve done, I realize that it’s all been spent on her. This is certainly okay with me. She’s so much fun, but she’s a high maintenance child…wanting my attention every second. If I’m singing…or dancing…or bouncing…or walking with her…or reading to her…then she’s fine. Entertaining herself is just not an option. I refrained from telling Connie (Dan’s mom) that I didn’t think she was going to have much opportunity for sewing…or anything else, for that matter. For all I knew, she would be a perfect angel for them. (I don’t doubt that Brittain knows that I’m a sucker when it comes to her.)

I dropped her off that morning with all the instructions that I had…which was basically her eating schedule and the information that hey, I’m sorry, but she doesn’t take real naps. I was gone ALL DAY and didn’t once pick up the phone to call and check up (which took a lot). When I returned that night to pick her up, hearing the recap of the day was hysterical. The grandparents had met their match in Brittain. They experienced all the same stuff that I experience every day. The good thing about it was that they loved every minute of it. This is good since I’d like to continue to have willing babysitters when we need one!

Brittain enjoyed her time with her grandparents. Not much progress was made on the baptism gown, but the time spent was priceless.

Connie sent a couple of pictures during the time when Brittain was being pleasant. This one was watching “The Little Mermaid”. She thoroughly enjoyed this…for about 10 minutes: 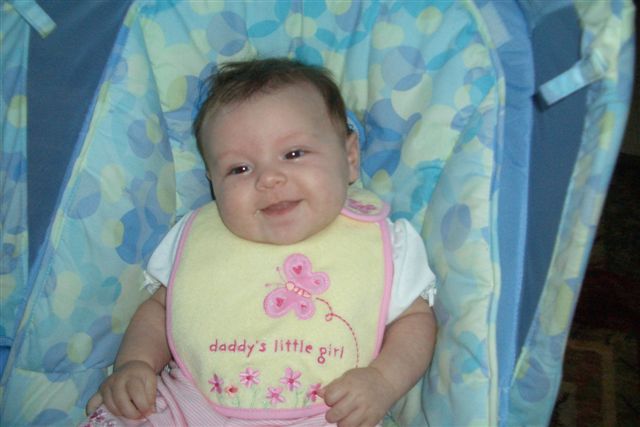 This one made me laugh so hard. Here is Brittain with her papa making it all look so easy: 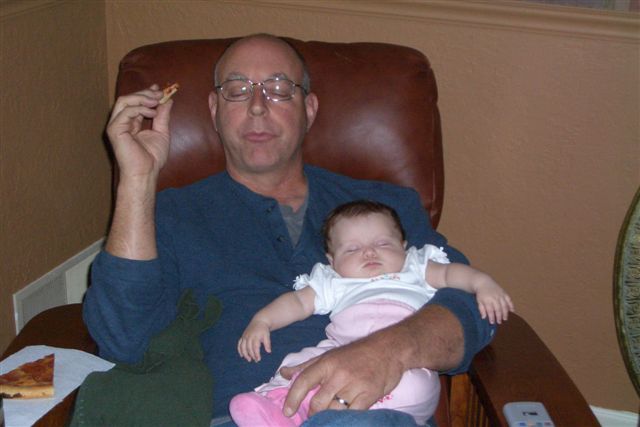 The times that I’ve been around babies and their parents, I’ve always wondered what “magic touch” the parents had to make their children choose them over other people. Is there really that much of a difference when a child is held by their parents as opposed to another person? How can a child cry with one person and then immediately stop when their mom or dad takes them into their arms?

I have to admit, I couldn’t imagine this being the case when Dan and I had a child. There was no way Brittain was going to prefer us over another person who had MUCH more experience with babies and children. Why would she want two people who didn’t know what the heck they were doing? I couldn’t imagine it, but it happened.

In her first 3 months of life, Brittain has certainly been around a lot of people. I didn’t start noticing it until a couple of weeks ago, but she has started to give her daddy and me preferential treatment. Sounds crazy, right? For a while, I thought I was imagining things, but I realize now that it’s a real thing. So, what is the reason that a child chooses it’s parents over another person? Perhaps it’s the fact that we know her habits. We know how she likes to be held, what her “i’m bored” cry sounds like, what her “I’m hungry” cry sounds like, what her “I don’t know why the heck I’m crying” cry sounds like.

Although I never wish for her to be fussy with another person holding or taking care of her, it is nice to know that if she HAD to make a choice, she would choose us. I mean, hey, I carried her around in my tummy for 9 months, endured horrible back pain and gained 60 pounds. She BETTER choose me, right?

Being a parent is still the most wonderful and most rewarding part of life. Even when fatigue sets in, or I look around my house to see that there’s dust an inch thick on every piece of furniture that we have, or the clean laundry never actually gets folded and makes it to the drawers because it just continues to pile up in the guest bedroom, I still can look at Brittain and know that she’s our greatest accomplishment. The house can be messy, but when she smiles, none of it matters.

I took these pictures a few nights ago. Dan worked the late shift every day last week, so his job as soon as he walked in the door was to get Brittain to sleep. When these pictures were taken, Dan had laid Brittain down on our bed with him beside her. Instead of her going to sleep, as the plan was supposed to be, they ended up playing. It was the sweetest thing I think I’ve ever seen. Brittain was on her back and kept turning on her side so that she could give Dan “kisses”. After she would kiss him, she would roll back over and start it all over again. This went on for about 30 minutes. This was one of these moments where sleep could wait. 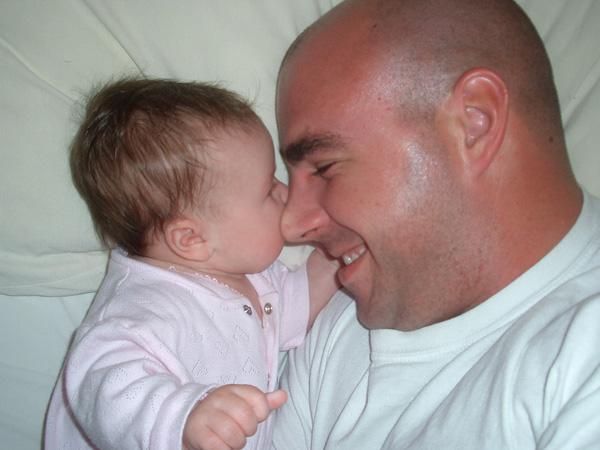 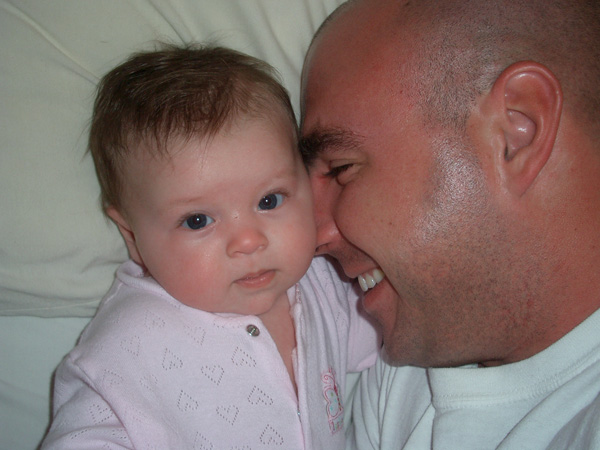 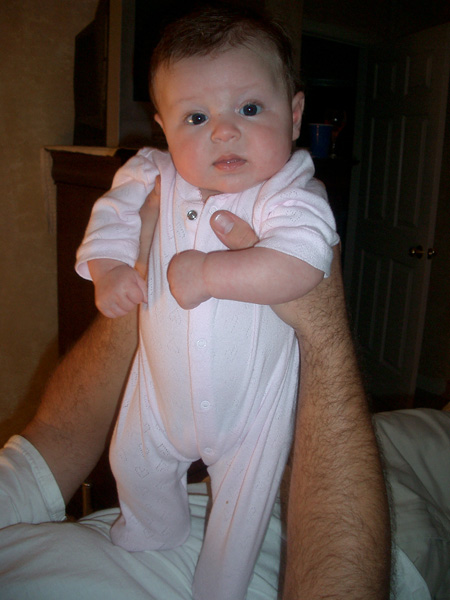