I think it was the day after Thanksgiving that we decided to really start using Santa as leverage with pretty much everything. Getting dressed, whining, eating, sleeping. As if I didnâ€™t already like Christmas, this year I developed a whole new appreciation. To fill up that month between Thanksgiving and Christmas we spent time preparing for the holiday with tree trimming and things of the like.

In these pictures, Brittain decorated â€œherâ€ tree at Gramy and Papaâ€™s. She was thrilled about it and she really took great care in placing each and every ornamentâ€¦on one branch. 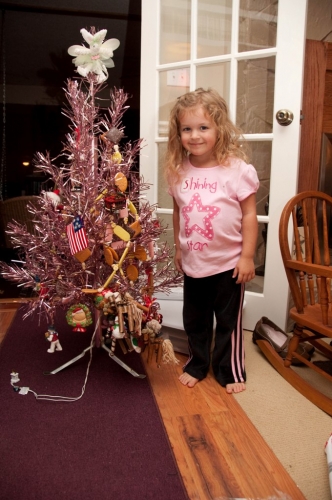 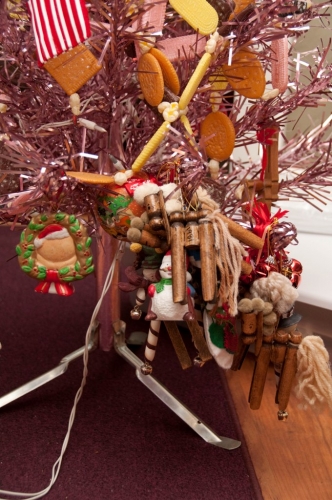 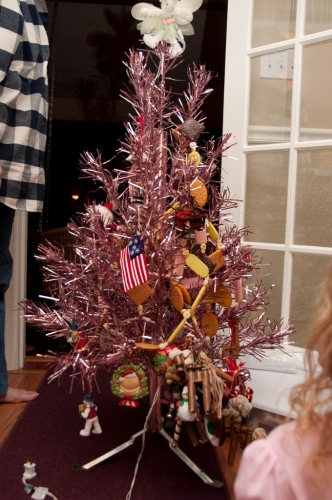 I bought a Gingerbread House kit and I was thrilled about it. Everything was there and you had the picture on the front of the box as a guide. It was going to be great and Brittain couldnâ€™t wait. I should have known that something would go wrong. As Brittain sat in the chair eating all the candy that was to go on the house, I was busy putting the house together with the frosting. All was well until, while I was holding one side of the roof until it dried, it broke completely in half. I tried everything on my own to fix it, but there was nothing that was keeping the roof from collapsing into the middle of the house. I was thankful that it wasnâ€™t bothering Brittain, but I was extremely upset about it. I finally called Mama and asked her to bring over some super glue. Does anyone ever actually eat those gingerbread houses after theyâ€™ve been sitting out on the counter for 3 weeks? Exactly. So, Mom came over with the super glue but volunteered to fix it without the glue so to keep the â€œintegrityâ€ of the gingerbread house. It was 5 hours later when she finished the masterpiece. 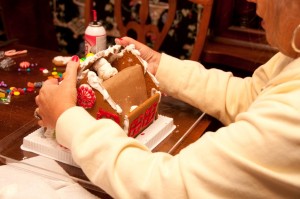 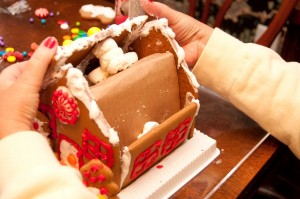 It was this picture that really summed up the frustration from that day. 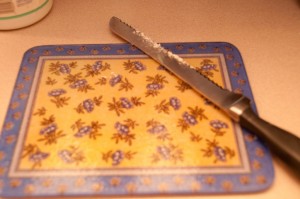 Whenever I attend any preschool function I seem to always feel like I really just donâ€™t belong. I try to. I go in and talk to the other mothers about why we are/arenâ€™t getting the swine flu vaccine for our kids, which kid has the peanut allergy, and what kinds of things we make for dinner that our kids will eat. Oh wait, donâ€™t include me in on that last one. But just when I think Iâ€™m getting the hang of being a preschool mother I find myself doing things like only paying attention to my own kid and only cleaning up after her (instead of doing that whole group effort thing).

But if I thought for a moment that the worst was behind me, I was dead wrong and it became very clear to me when Dan and I walked into a very tiny classroom to see the 3-year old Thanksgiving productionâ€¦with 3 classes! Imagine somewhere around 40 3-year olds, and ALL of their parents and grandparents trying to get a small glimpse of their own child at the front of the room. The real show was if you looked at the crowd of parents. Iâ€™m surprised there wasnâ€™t a brawl.

Once the program was over we headed across the hall to a room that was slightly bigger for the kids to eat their Thanksgiving Feast. We gave our thanks when it was finally time to go. We are not big fans of a room full of lots of screaming children. 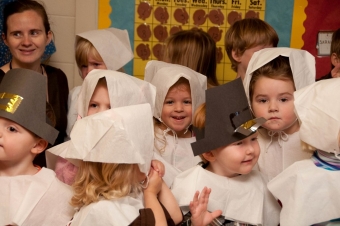 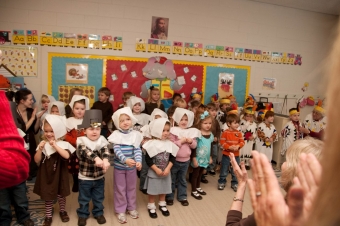 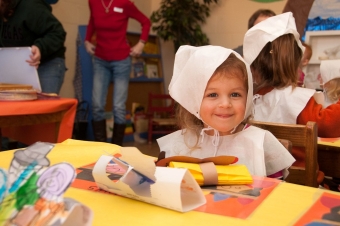 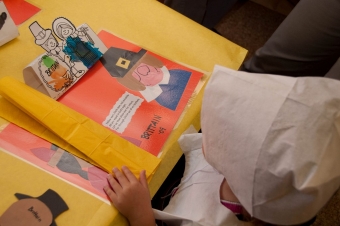 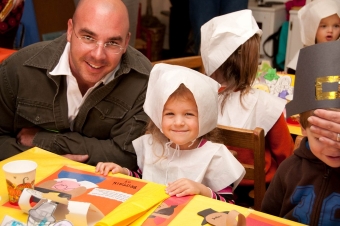 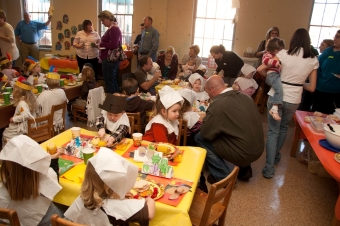 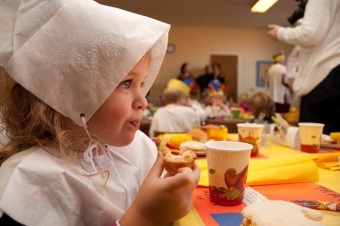 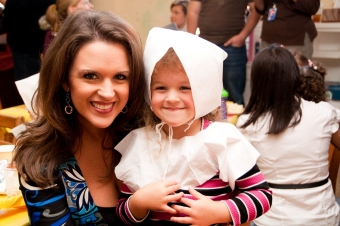 Parent watch day at Studio D. Itâ€™s the day all the parents get together to see whose child is the best, whose child is the cutest, whose child behaves the best, etc. etc. For some reason even though Brittain thoroughly enjoyed the summer dance â€œcamp,â€ she hasnâ€™t been as thrilled about the weekly ballet/tap combination class. Iâ€™m not sure if itâ€™s that we canâ€™t get the nap thing figured out so that sheâ€™s awake and alert and ready to get dressed when the time comes, or if perhaps â€œdanceâ€ is just not her thing. Whatever it is, every Thursday at 4:30, whether itâ€™s me or Dan who is home to get her ready, we prepare ourselves for the worst…and yes, in our opinion it’s always that bad. Fortunately, most weeks by the time we get the hair in a bun and force the leotard and tights on her, she miraculously becomes a different child and is suddenly excited about going. On the day we were to go and actually get to watch why itâ€™s worth what we have to go through each week to get her dressed, I took a little more care with her hair. Somehow I talked her into letting me fix it twice when the first time I put it up it was crooked and also had several visual â€œlumpsâ€. But as far as her outfit went, I havenâ€™t invested a lot of money into several different outfits because Iâ€™ve been holding out to see if she was going to want to stick with it. I did my best with the Wal-Mart pink leotard and skirt and hoped that no one would get close enough to her to notice the severely picked tights.

Dan was working so I invited Connie (Gramy) to come along and watch. After all, she is the one who pays for the class, so she deserved to see where her hard-earned money was going. Brittain and I arrived early and I perched myself in one of the folding chairs trying to juggle my huge camera and also a small video camera. Gramy arrived shortly before the class began. The setup of where we were sitting was a little awkward. There were chairs set up in the back and the side of the class, so you were either looking at the backs of all the children or the sides of them. I had chosen a seat in the back thinking that this would be a better view as I would also be able to see the front of her in the mirror across the wall. Throughout the class I found myself thinking strange thoughts.

â€œI canâ€™t believe I didnâ€™t cut that huge white tag out of her leotard. How did the rest of the parents know to do that? Oh wait, maybe itâ€™s because my kidâ€™s outfit is a cheap one from Wal-Mart so you can just SEE the tag through the cheap, thin material.â€

â€œDoes Brittain have a beer gut? These are 3 year olds. Arenâ€™t they all supposed to have those cute little guts? Where are the other girlsâ€™ guts?â€

â€œI feel so old. I went on a beach trip and babysat this teacher when she was a newborn baby!â€

But then my thoughts were interrupted when the teacher began to ask the kids questions. â€œDo any of you remember what this is called?â€ â€œWho can do this step?â€ I shifted to thinking, â€œOk. Come on, Brittain. Just answer ONE of the questions.â€ Youâ€™re a smart girl. I know you know this stuff. I was doing my best not to get discouraged and throw my hands in the air saying, â€œI give up. Something is clearly wrong with her. She doesnâ€™t know any of these answers. We might as well quit now.â€ But I also had that uneasy feeling you get around even family. You want everyone to think youâ€™re doing a good job as a mother, and I have this ability to automatically think everyone glares at me and thinks to themselves, â€œIf only SHE was doing a better job, her child would be better at this.â€ It became glaringly obvious that Brittain was just not going to answer a question and at one point Connie leaned over to me and asked if the other kids in the class were older than her. I wasnâ€™t completely sure of the answer, but I was pretty sure that the kid who was answering almost every question was actually younger than her. None of it mattered of course, but I guess both of us, in our own ways were trying to justify the reason she wasnâ€™t piping up when a question was asked. At one point near the end of the hour, Connie leaned over to me again and said, â€œSheâ€™s good at that.â€ And it was something equally as difficult as a dog trick.

When we left that evening Connie asked me if I remembered any of the steps and positions back from when I took dance. Especially at that moment, I couldnâ€™t pull anything from the dance classes I had taken 20 years prior. So, she suggested that I start looking the dance steps up on the internet and going over them with Brittain each week so that she would be more prepared for class. I left the class that evening feeling completely drained and exhausted despite the fact that I had been sitting the entire time. I had my work cut out for me.

The last few Thursdays, Dan has been around to help with getting ready for dance. I think weâ€™ve both agreed that if things donâ€™t change, after the dance recital in May, we may try something else for next year. Maybe this is just not up her ally. Maybe weâ€™ll try violinâ€¦or maybe weâ€™ll wait til she can choose something on her own based on her interests. I remind myself again. Sheâ€™s 3. Thereâ€™s plenty of time for it all.

The icing on the cake was later that evening as I was getting Brittain ready for bed, she stopped and said, â€œMommy, do you know what this dance step is?â€ I said no. And she said, â€œItâ€™s a Sur le cou-de-pied.â€ 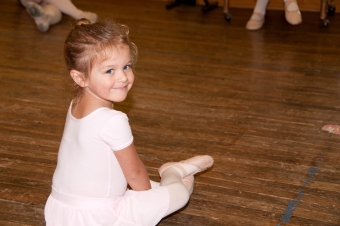 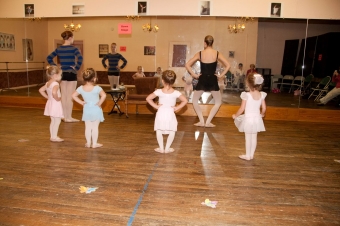 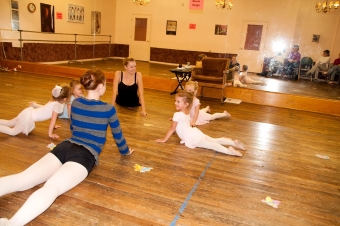 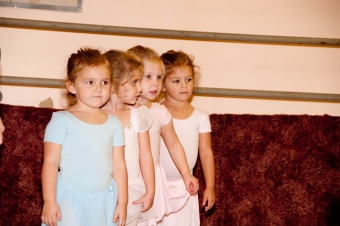 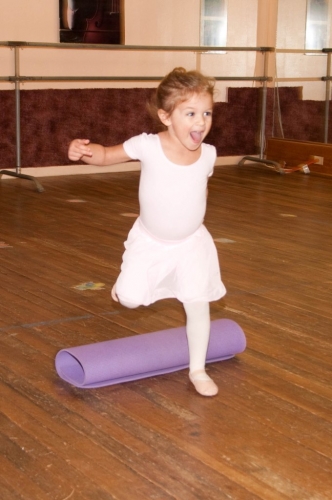 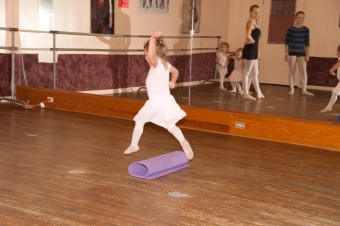 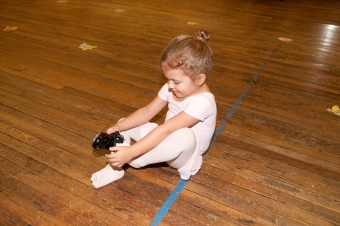